The first hundred days are drawing to a close. What have we learned? That I am unstable and whiny, but at least I manage to get some writing done and submitted anyway. I can't be awful, as some things, in rare instances, get accepted. We've learned that I might not be strong enough for this gig: too cry-y.

The four pieces that have been so soundly trounced recently by editors have undergone varying levels of edits. The blackbirds are hibernating or being punished or something, but the other three have been tweaked, so it's fitting and proper to get them out to new editors. I also need some new pieces. My daydreams are becoming more fictional or fictionalized. How much fiction needs to be added to memoir until it's a story? Not in a Frey-an lie kind of way, but in a Hunter S Thompson this-can't-be-real kind of way. There are some hard stories in my mind, and it might just be easier to get them out if they weren't so much mine, you know?

Today and yesterday were spent working on SOPs. I need a draft of the bees essay by the end of this weekend or else I am seriously grounded.

Have gotten more retweets from @cnfonline; they feel like little tiny acceptance letters, each and every one.

I mentioned on Facebook that I had a folder system for my submissions. Here's what it looks like: 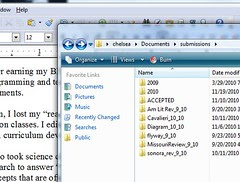 The top two folders, 2009 & 2010 are full of pieces that were rejected. ACCEPTED is self-explanatory. All of the rest are pending. I use folders so I can store the exact version that was submitted along with any cover letters etc. Plus, with the folders closed, I don't have to be assaulted with volume of the first two compared to the third.

In the beginning, I reread all these posts first thing the next day. Now, sometimes I do and sometimes I don't. Sometimes, when I read back over one, I have no recollection of writing a particular phrase or passage at all. It makes me think that this act of blogging about writing is becoming a sort of wordy trance. Or else, my sleep and sanity cycles are so fucked up that I am just a zombie by 10 pm. I'd like to hope for trance.
Posted by Chelsea at 9:46 PM

Email ThisBlogThis!Share to TwitterShare to FacebookShare to Pinterest
Labels: 365 days of writing