My 39th birthday is coming up and I am waffling between apathy and anxiety about it. I have often had high expectations for my birthday and have been sad when they weren't met, so I'm trying to keep a lid on that this year. So, on the one hand, it's just a day--I'm pragmatic and know this in my heart. I will be no different on Monday than I will be on Tuesday and all that.

But, on the other hand, it sounds so much older than I feel. Almost 40? Come ON. Maybe it's the starting over, back in school, etc that's contributing to my general disbelief, but I'm not sure. There are some alarms going off, though I doubt it's all the usual stuff. I am not lamenting my lack of babies or anything. Maybe my lack of a viable career. Also, some options have passed me by forever (and I am not being overly dramatic here, I'm just saying). For example, I will never be in the 40 under 20 or even, likely, the 20 under 40. Even my starting over looks different now than it once did. There's less grace, more clawing for a comfort zone.

I am so set in my ways that I make things harder for myself than I am supposed to. I don't act nearly forty most of the time... so that when I do, it doesn't serve me. I don't make enough room for others, I always act the way I act, I am unforgiving. These are the ways of old people, and I am only now learning that they are my ways.

Sometimes my knees feel forty, but only on the three flights to my apartment, and there are times that I look in the mirror and see all these lines around my eyes and mouth--and am both enchanted and appalled. I know I will never have the smooth stomach I once dreamed of, and that the stomach I do have is considered "character," at best. I have a lot of character, alright, and it will probably wind up being my downfall.

I like all the lines on the back of my hands--they are new. I like that my voice stayed a bit raspy, even though I quit smoking nearly a decade ago. I like that I am in better shape, even now, than I was ten years ago. So, you know, don't get me wrong. It's not all bad; it's just all slipping when it once used to be climbing.

Telling the truth is hard for me.

I don't lie very often, but I keep a lot to myself. You wouldn't know it to spend ten minutes with me, because I hardly shut up--yet my closest friends and a very few lovers have been able to hear what I leave out. (The best among them don't let me get away with it.) It's my birdsong and it sounds like a dog whistle and looks like an eyeroll.

The things I let slip out are meant to entertain and attract. I will say anything to keep you from leaving, if I like you. I want my words, my writing, my antics to please. To retain. Yet I hold back, even knowing that my readers and lovers and friends would prefer it if I didn't. I know this is true. But, you know, I know a lot of things that I am not able to use practically. For example, I recently learned that the Queen of Belgium has a hall of mirrors that is wallpapered with the bodies of over a million and a half Jewel Beetles. It glimmers a green and gold bubbled iridescence, and even the chandelier shape seems prosaic under the glow of all those little bodies. It screams out the labor that was required to create it--a staff of thirty, hunched over bugs and glue.

It is beautiful, but if my own tiny insect collection is any indication, it is also now teeming with dust mites. Even now, her guests, each time they walk through, are being peppered with microscopic scraps of leg as the mites chew the joints in each of the million point six carapaces. 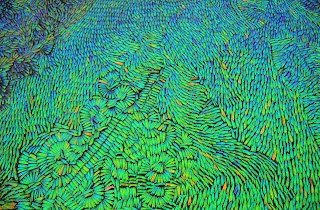 Are you still here?

Today I got so frustrated that I lost my shit. And my optimism. A good friend pointed out for the millionth and a half time that I am too hard on myself. I have only managed to get one new piece of writing accepted for publication since I started my program. And. And. And. Goddamn it.

It feels like epic failure even though I can cite a number of reasons why it is not, if I was say, consoling a friend in the same situation. I don't often treat myself like a friend: I am not fair with myself. I exaggerate; I totally kitchen-sink all of my arguments with myself; I am exceedingly unkind in my judgements about myself. In this way I have a wound that never heals. That same good friend pointed out that it is this wound, and my attempt to close it--even as my broken arms clutch at the seam--that makes me a good writer. My critical eye sees a lot and its distortion, while not universal, sometimes rings a familiar note. I like that. I like it because I can reach others--not because the act of writing fixes any of my brokeness. If I could be put out of the mental turmoil in exchange for a dull life of cube walls and glue bottles, I would not do it.

When Camille Dungy spoke at the University she said she was a better person in her writing. She said she could edit out the pettiness and small-mindedness and be the better self she wanted to be through her poems. I try to be better every day but I often fail. I try to be true in my writing and I often fail at that, too. Too often, I write to please the reader instead of myself. I know too well that there's no pleasing me. I've heard it over and over and over, inside my head and out. 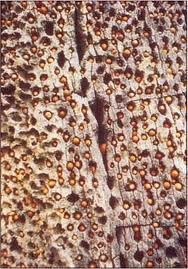 My taste is good, and my commitment, strong. I am stronger than I allow, and better. I know this, too. Just like I know that there is a species of woodpecker that carefully inlays acorns in the trunks of trees for winter storage, one by one in nut-shaped holes, so tightly that the acorns cannot be worried loose by the clawed fingers of squirrels. The holes are drilled first and then acorns found to just fit each one. Fewer than a million and a half to a tree, I'm sure, but no less lovely and more useful by far.

I don't know what I'm trying to say. But it does seem that I could learn something from the damn birds about what to spend my time on, and how that time will be repaid. If I were in the mood to learn anything, that is.
Posted by Chelsea at 9:09 PM No comments:

In art school, I left things untitled that had no obvious name. I felt like a phony and a douche almost every time I forced a name on a piece, so if the name didn't leap, fully formed, I did without. In critique, someone would invariably ask me to justify the *title* of untitled. Like, what was I trying to say to the viewer with my refusal to give them a way into the piece?

That word, refusal, is why I gave up being an artist. Also other words, like juxtaposition and conversation. And more I can't think of because it's late. Because anything I left out was a refusal and any two things I put in we're being meaningfully juxtaposed or were in some conversation that we (the critics of one another's work) had to transcribe and decipher.

'No conversation' was never an option, and I had no words or skills to assert my refusal of that paradigm.

When I refuse, it is awkward and stilted and uncomfortable and you know it's happening. I mentally rehearse asking for feedback, and try to have a socially acceptable response at the ready--one that will give me space to move away and think about that feedback somewhere alone for awhile--once I've gotten it. My unmitigated glare can shut down the conversation otherwise.

My enthusiasm, untempered, can be just as awkward. I will interrupt your conversation with a non sequitur daily, if not hourly, without some complex system of inner filters that always seem frayed and penetrable. And I've asked over-casually in my mind a million times who you had dinner with, rejecting the answer of "some folks" every time. But in my mind, I reject your lie in a way that will allow you space to answer. All in the hopes of a casual delivery, but what comes out is tensely predetermined. And you've no option but to lie more or defend.

This is how a crack forms in any commitment. Why I dropped out of artisting. And my marriage. And the corporate world. It is difficult for me to fit in without practice and repetition. I can learn the words of gracious disappointment or of curiosity in the face of misunderstanding. But they sound learned to my tin ear, not felt. I cannot be gracious under the heat of your stare that says "I can't believe you just said that." Even if your stare is only saying that in my imagination.

There's a near constant near panic to my inner monologue. The sentences in there all end on tremulous little scared notes, high-pitched voices. (Not real voices, she said, reassuringly.) O the histrionics! O the end is nigh! Forsooth, forswear!

All semester, even all year, I've struggled with the fact that my *writing* resists my voice at every turn. (That concept of refusal again, when I know damn well that my voice withers and scampers off at the glare of my pen. I can't believe I just almost said that.) But all evidence seems to point to my voice being more interesting and readable than my writing. There is a chasm of trust that I am afraid to leap across. Yes, this is a synecdoche: for everything, always. What's wrong with your writing is what's wrong with your life.

And writing, like life, is harder than I thought it would be. Or so my poster with a kitten stuck comically in a tree says.

Somehow I'm supposed to learn to trust myself and others and everything this summer. My chest gets tight and my thoughts spiral out hysterically like people out the doors of a theater fire just thinking it. One jump and I'm over the chasm. When I look back, it will seem so much smaller of a space to have crossed, I know this to be true. Everyone in front of me seemed to have hesitated for so much less time than I'm taking. My mind is screaming two things: JUMP and RUN BACK, NOW.

Posted by Chelsea at 2:45 AM No comments: