Two weeks in, and this is the first day of zero writerly activities. All I did was work and study astronomy.

OK, that's not all I did. I woke up and did pilates, THEN studied. I worked (and studied on all my breaks) then came home and went to the coffee shop to knit for one and a half hours. I was really hoping for other knitters, and on any other night, would have knit until 9:30, but I came home and had dinner and studied. Now I am going to collapse and dream of electron degeneracy pressure, ever expanding chains of galaxy clusters, the Chandrasekhar limit, and ozone spectral lines as a sign of life on some distant planet or moon. The final is tomorrow after work. I'm praying for a C on the test, which will give me a high B in the class. Fingers crossed.

There have to be days off, I guess. But maybe the next one I take, I will plan to enjoy a bit more. 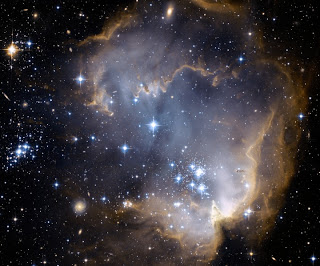 The star cluster, NGC 602, near the outskirts of the Smaller Magellanic Cloud. It is full of young, hot, blue stars. In this picture, the objects with crossed lines through the center are stars, while the smeary blobs are galaxies, which are hundreds of millions of lightyears more distant than the stars. Image courtesy NASA, ESA, and Hubble Heritage Team
Posted by Chelsea at 10:47 PM

Email ThisBlogThis!Share to TwitterShare to FacebookShare to Pinterest
Labels: 365 days of writing, Brainstorming and notes