This morning, I got up crazy early and took a taxi to the Atoche train station to take the AVE train to Barcelona.

The AVE train is the high speed train--and for much of the journey we were nearing or at 299km/hr (that's just under 186 mph for those of you about to google that). It was surprisingly smooth and unsurprisingly high tech. The chairs were very ergonomic and they played an Audrey Tautou romantic comedy--which awesomely didn't require headphones to follow. We made one stop, in Zaragoza (Saragossa), and the whole trip, nearly 400 miles, took less than 3 hours station to station.

Then I wandered around the amazing, beautiful, surreal streets of Ciutat Vella, the Old City. Everything was closed (including the Museu de Geologia and the Museu de Picasso). I saw the most remarkable balconies on narrow winding streets and mosaics and stained glass and old butted up deliciously to new--THIS city knows how to do that with some goddamn panache.

MAN I LOVE BARCELONA. Also, the proprietor of an Alahambran import store might have proposed to me after I accidentally used the informal form. Lesson learned: usted usted usted!

Tomorrow I hope to see Parc Guell y Familia Sagrada, La Perada, y Casa Batlló. With Tuesday being spent at the Botanical Garden, and Wednesday (hopefully) at the Ornithological Institute, this means I will likely miss Parc de Miró, and the Picasso museum. Luckily the Dali museum is outside of Barcelona, so I can only mourn missing it theoretically. I will definitely becoming back here.

And here's one more of a very serious "cucurucho con dos" by the waterfront. One scoop was tirimísu, and the other "torró." Second lesson learned: torró no es muy bueno. 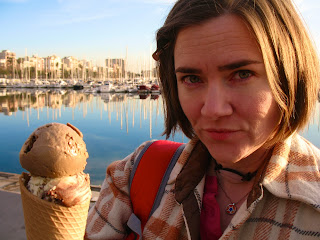