I had a tough time waking up today. Yesterday, exhaustion or jet lag or whatever overtook me and completely jacked with my sleep cycle. I think part of my hesitation this morning was because I knew I had to pick between the Prado and the zoo--and that was a hard call to make. I should have been able to see both in my time here, but last night I was just too tired. Today, because of the holiday, hours at both attractions were limited. And I knew each one would take the whole day.

Ultimately, I picked the zoo, because this is a research trip. But my heart broke a little to miss the Prado. Just means I have to come back, right?

By the time I took the subway all the way out to Casa de Campos, it was already 11:30. The Madrid zoo is remarkable for the number of endangered (and in at least one case that I saw, extinct in the wild) animals it contains. I saw black rhinos, a very rare European mink, red pandas, giant pandas, a lion that no longer exists outside of zoos (the Barbary lion), a Griffon vulture, and a crazy little South American bear. One animal I did not see is the Iberian lynx, which was a drag--they are supposed to have an exhibit, but I couldn't find it. I also got to hang out in the lemur enclosure and listen to a completely incomprehensible talk about the conservation efforts and unique characteristics of the three species that they have at the zoo. I did catch something about their thumbs being adroit and that they have only male ring-tailed lemurs at the zoo. 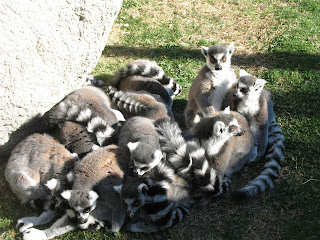 After the zoo, I wandered around a less-awesome part of town, lost, for a bit and then finally made it back to the commercial district where everything except ice cream shops was closed for Christmas Eve. I ended up having to eat fast food for dinner--lesson learned, by the way? Ice cream would make a better meal than Euro-knock offs of junk food.

I ended the day frustrated that I am leaving Madrid in the morning. There are a million other things I want to see and eat, but Barcelona (and Gaudi! and paella!) awaits.
Posted by Chelsea at 2:22 PM