Notes from today.
During the day I walked with an ex-pat and visited some lovely tourist attractions. She also helped me navigate the largest department store, Cortes Ingles, where I upgraded my shoulder bag for a small backpack. My shoulders were beginning to suffer. After we parted ways, I wandered through the Plaza Major, which was resplendent with strange Christmas decorations: wolf hats, psychedelic children's wigs, and caganers (“poopers”--little squatting figurines that are an essential component of any Catalan nativity scene). I got one for my mother's own bizarro Christmas village in Phoenix. By the time I get to Barcelona, the giant caganer in one of the malls will probably be gone. 'Tis a pity. It is said that a small child could climb his coiled refuse like a stack of tires. Or if it isn't, it should be.
Madrid downtown at night. The Christmas lights, like the strange wigs, were bright and ubiquitous. I will confess upfront that I was too chicken to go into any of the bars alone. Always a group of young men could be found huddled around their cigarettes and each other just outside the tavern doors, and I could not muster the presence to part them. But it is sometimes good to follow the crowd—in this case they led me down a side street off the Puerta del Sol to the Chocolateria San Gines. But not before I got to watch a trio of buskers perform a rendition of the theme song to “Friends” with the whole crowd singing along to the chorus. 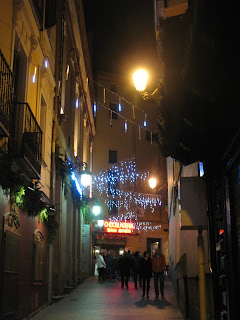 Based on the line to get in, it is to Madrid's chocolate and churros what Cafe du Monde is to New Orleans' coffee and beignets. The crowd was formidable and the chocolate thick. I suddenly understood why the waitress at a cafe the day before had dissuaded me from the Ibarra hot chocolate, because she said in her almost accomplished English, “It is just liquid.” Spanish chocolate is not just liquid—it misses qualifying as a sauce by a very small margin.
At San Gines, for less than four euros you get a teacup's worth of chocolate and 6 greasy though not-too-sweet churros. It is a place for groups, and I felt conspicuous and inconsiderate for sitting at a table alone amid such a throng. There was only one chair, but couples and other solo desserters had perched their cups on the counters and even the wide molding around the room to be able to dunk and chatter. I made motions to move for two older couples, “se tranquilo” one of the men said, Relax. I guess anyone that would stress out over dessert has bigger problems to worry about.
Posted by Chelsea at 4:43 PM